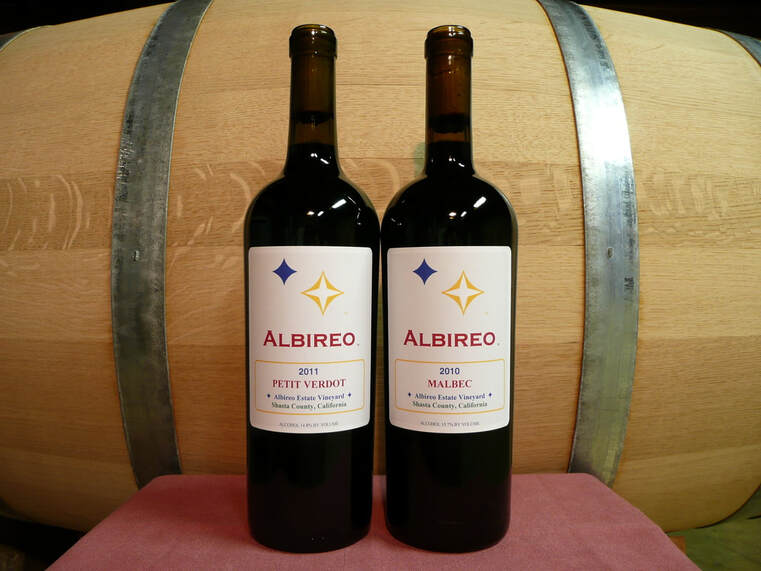 ALBIREO wines are pure: they are untreated, unfined, and unfiltered. Consequently, there is typically a fairly heavy deposit of sediment that collects in the bottle. This is usual and proper for the finest of unprocessed and ageworthy wines. The sediment consists of microscopic bits of grapes and yeasts and is a vital natural component of wine. (Yeast is about 50% protein and 25% fiber, and the grape residual is mostly carbohydrates.) Because the bottles are stored upside down in their cases the sediment slowly settles onto the corks over the years. When opening a bottle be careful to pull the cork very slowly so that sediment does not fly out with the cork. Also, it is easy to avoid pouring sediment from the bottles into wine glasses with a little extra care. We highly recommend using a bottle filter spout; we have an efficient and elegant one available for purchase (see The List below).

Click on the Wine Care button below for detailed instructions on the care and handling of ALBIREO wines. [Document is in 'pdf' format.]
Wine Care

Wine orders can be placed by phone at 530-474-4375. You must be a minimum of 21 years old to order. Prices listed below are per bottle (750 mL unless noted otherwise) and sales tax will be added. A 15% discount applies at the case level (12 bottles or more purchased), including mixed cases.

We can ship wines to you via FedEx if you are least 21 years old. Presently we have permits to ship to anywhere in California, Michigan, and the District of Columbia. For other States check with us to see if we can ship to you using a wine shipping service.

Ample acidity that is perfect with rich red pasta sauces. Drink chilled in the hot summer.

Half Barbera and half Malbec. The result: the acidity of the Barbera is mellowed somewhat by the Malbec in this rendition of the Binary theme of ALBIREO. Pairs well with pastas, pizza, a wide range of cheeses, and grilled meats. Drink chilled in the hot summer.

A lighter-bodied Malbec but still deep purple in color. Pairs well with most meats and cheeses, including chèvre (goat), goudas, and cheddars. A very versatile wine.

Full bodied and bold, this Barbera is one to enjoy with pasta dishes containing meat or sausages; as simple as thick tomato sauce ladled over spaghetti or as elaborate as lasagna made from scratch.

Objet Trouvé is French for a found object that has been imparted with aesthetic qualities by the forces of nature. It is an appropriate description for this wine blended from the Bordeaux grape varieties of our vineyard. The 2012 OT continues the tradition of this hallmark blend of the Estate.

Deep purple color and full bodied, with cocoa-mocha toastiness contributed by the barrel.

Our first release of a Cabernet Franc, and well worth the wait. Loaded with plush fruit, it also coats your palate with its high glycerol content (it has "great legs"). Bottled in 2014, released in 2015.

Starcluster is made from grapes harvested very late in the season. Fermentation was allowed to complete, making a dry wine that is smooth and clean on the palate. (The unfortified wine has an 18% alcohol content by volume.) Savor this refreshing change from sweet Port-style wines. Pairs especially well with Christine's chocolate biscotti. Bottled in 2014, released in 2015.

Starcluster is made from grapes harvested very late in the season. Fermentation finished naturally, making a semi-dry wine (residual sugar 2.7%) that is smooth and clean on the palate. Savor this refreshing change from fortified, sweet Port-style wines. Bottled in 2015, released in 2017.

Another installment of our hallmark Bordeaux-varieties Estate blend. Bottled in 2016, released in 2020.

Choose 12 bottles. Price varies according to wines selected. Discount is 15% for full cases.

An elegant stainless steel pour spout filter that inserts into a bottle to screen out sediment from the wine. Has a stopper to seal the filter in case you don't finish the bottle. Lasts for a long time with proper care. Essential for easy enjoyment of unfined and unfiltered wines, it significantly reduces the amount of sediment entering a wine glass. HOSTTM Brand.

Contact Us
BINARY, OBJET TROUVÉ, and STARCLUSTER are trademarks of Albireo Vineyards.

Text, images, and designs appearing on this Website are copyrighted by Albireo Vineyards and may not be copied or used without permission.